This is the recognized web site for the Shire of Glynn Rhe of the Society for Creative Anachronism, Inc. and is maintained by Lady Evangeline Bajolet.

For information on using photographs, articles, or artwork from this web site, please contact the Webminister at Web.GlynnRhe@Meridies.org.  He or she will assist you in contacting the original creator of the piece. Please respect the legal rights of our contributors.  The original contributors retain the copyright of certain portions of this site.

All external links are not part of the Shire of Glynn Rhe web site. Inclusion of a page or site here is neither implicit nor explicit endorsement of the site. Further, SCA, Inc. is not responsible for content outside of meridies.org and glynnrhe.meridies.org.

This page will feature Arts and Sciences (A & S) projects by members of our Shire. A & S projects can range from the creation and recreation of physical objects to in-depth research papers and everything in between! 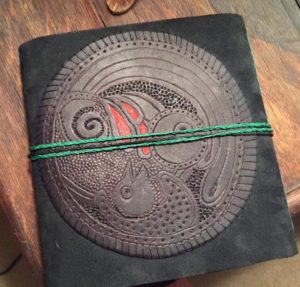 An elevation vigil book crafted by THL Muirenn inghean Chiarain for Mistress Cecily du Chinon!  Muirenn, called Morna by her friends, designed this Viking style pelican medallion to reproduce in leather work. She then cut and assembled the book and attached the medallion – all hand-stitched. This was her first venture into leatherwork. Realizing that she enjoyed ‘stabbing and hammering at things’ Morna has plans next to create two Viking style bracelets out of brass. 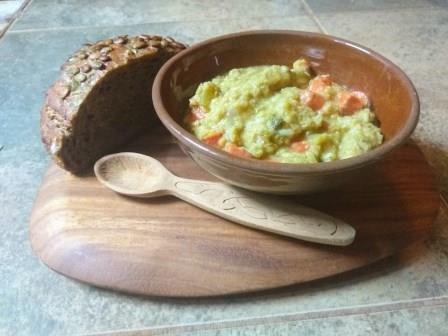 A lentil stew was prepared by Lady Evangeline Bajolet for a fundraiser luncheon. This medieval stew  (otherwise known as  pottage) contains lentils, carrots, celery, onions, garlic, and a variety of herbs and spices simmered together in a vegetable broth. Served with dark bread, it was warming and filling!

Pottage was an daily dish in most medieval households that had an ever changing ingredients list depending on what was in season in the garden, what was left in the storerooms, and how big the family food budget was.